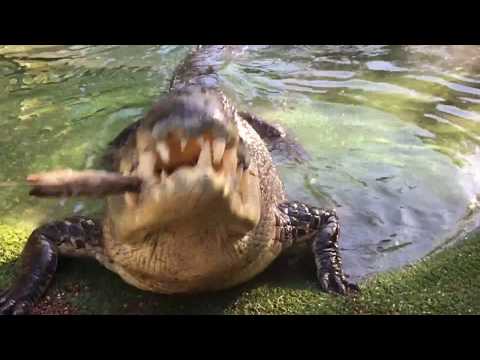 Australia’s crankiest crocodile, Elvis, reinforced his reputation when Australian Reptile Park staff fed Elvis a piece of kangaroo leg. The snaps of the bone sent chills down keepers spines with Elvis easily crushing the bone in his massive jaws. Elvis the crocodile , who is 5metres (17ft) in length, gained world-wide attention when he almost ate his keeper’s lawnmower in 2011, earning him the title of Australia’s crankiest crocodile.

Elvis became extremely fierce after the lawnmower attack and is an outstanding dominate male who, like all saltwater crocodiles, is very territorial. He’s a superior hunter and predator, possessing larger than average size teeth, which are mighty impressive. A wound inflicted by the largest living crocodilian on Earth is extremely severe and the species – typical opportunistic predators – is infamous for its attacks on humans.

Elvis is a fine ambassador for his species. Saltwater crocodiles were once hunted to the brink of extinction in Australia, but following their status to legally protected in Qld, NT and WA, their numbers have made a full recovery and they are now listed as least concern by the IUCN.

Spring Babies at ARP in School Holidays
Scroll to top