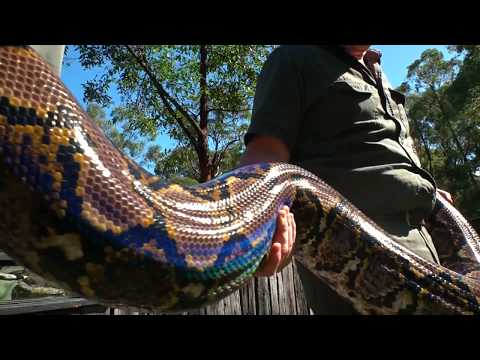 Monster the reticulated python is a WHOPPER!!

The Australian Reptile Park’s largest snake, Monster the reticulated python, had her inaugural measuring and weigh-in. She came in at 5.28m in length and 53kg in weight which is a massive result. Catching her is a tricky event explains Tim Faulkner, General Manager of The Australian Reptile Park: “Monster was in an awkward position which made it difficult for keepers to get her out.” Luckily the keepers are extremely experienced and the event was completed without incident and to the delight of visitors to the Park. The 5.28 metre long python is expected to live up to 30 years in captivity. In the wild, her life span would be shorter; however, her species could grow to a staggering 10 metres.

“Monster can be a difficult girl”, adds Faulkner. “The reticulated python is known as an aggressive species, so our Keepers need to take extreme care. Weighing Monster is essential as it’s the first indicator of her overall health. Reptiles are unlike mammals and show very little sign of sickness. Mammals become vocal or stop eating which makes illness easier to detect. Reptiles don’t show these obvious signs.”

“We’re really happy with the result”, Faulkner confirms. “It’s a great place to start from with room for her to grow both in length and in weight. With this weigh in, it could be said that Monster has the potential to eventually be the longest snake living in Australia!”

Found in Southeast Asia, the reticulated python is the world’s longest snake and one of the only snakes to be considered true man-eaters. Not a pleasant death for the reticulated python’s prey; they take their victim by surprise, holding it with sharp teeth and a strong jaw. Their teeth are serrated and backward facing, which means once they’re attached to the flesh of their victim, the razor sharp teeth won’t come out. The snake then constricts the air out of its prey, causing death by suffocation or burst blood vessels. Eating the victim whole, the python may not need to eat again for weeks or even months. Monster usually feasts on goat weighing up to 15kg six times a year.